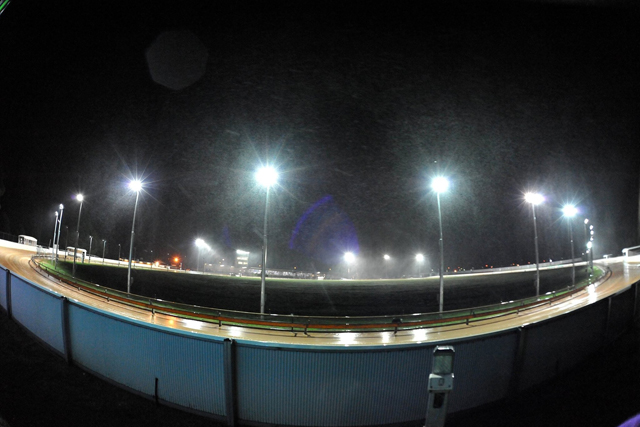 
In between the heavy rain that fell throughout Victoria, Ballarat hosted eight heats of the Group Two $67,000 Ballarat Cup with the winners making up the 2017 field, and what a field it is.

Racecaller James Van de Maat went as far to describe the field as one of the best he has seen assembled and it is easy to see why.

And to cap it off, four of the eight greyhounds engaged in the 2017 Ballarat Cup have stepped straight out of the worlds richest race for greyhounds, the Group One TAB Melbourne Cup.

It was no surprise that last start Melbourne Cup winner Aston Dee Bee clocked the fastest heat time of 25.265 with a first split of 6.51. His speed when he mustered up was more than impressive, gaining control of the field before they hit the first corner. Can he make it two consecutive group wins from the cherry.

Mildura-trained Jimmy Newob was the second fastest qualifier stopping the clock at a respectable 25.347 seconds on a wet track, despite clocking one of the slowest first splits (6.58sec) in the heats.
On a night where the majority of TAB favourites saluted, Jimmy Newob was the highest paid winner at $4.20.

After two attempts at a run in a Country Cup (Geelong and Bendigo), Jimmy Newob has finally earned his rug, albeit box number four.

Ando’s Mac is the only local representative in the 2017 Energis Ballarat Cup, after taking out the first heat thanks to an unimpeded run from box eight. Trained by Anthony Azzopardi, Ando’s Mac continues his stella career at his home track, and is now attempting to claim his second Victorian Country Cup after winning Warragul’s early this year.

It was no surprise to see Striker Light spear to the early lead, clocking the fastest first sectional of 6.43 seconds and winning  by the largest margin of 7.76 lengths.

Seona Thompson’s kennels are on fire at the moment and her run into the Ballarat Cup lived up to expectation being the only trainer to have multiple greyhounds engaged in the 2017 Ballarat Cup.

Bewildering was ultra impressive in his heat win, missing the start but using his big frame to make his own luck. Bewildering has had two attempts at Country Cup glory (Shepparton and Geelong), for two second placings. Box five in this years Ballarat Cup, wont do him any favours but you can never discount this dogs ability.

Aptly named Big Flood was the final greyhound to earn a rug in the heats and from the Thompson kennel. This will be his second attempt at a Country Cup, after finishing fifth in the Cranbourne Cup in his 11th start.

Judicial Man is aiming to do one better in this years Ballarat Cup after finishing second in last years Cup to Zambora Brockie. The Brooke Ennis trained chaser jumped straight to the early lead to win his heat by 1.51 lengths.

Kouta Mayhem has launched himself into another group race, backing up his third placing in the Melbourne Cup. Kouta Mayhem made plenty of work for himself after missing the start but pushed through to battle with Aston Miley to make it through to the 2017 Ballarat Cup. 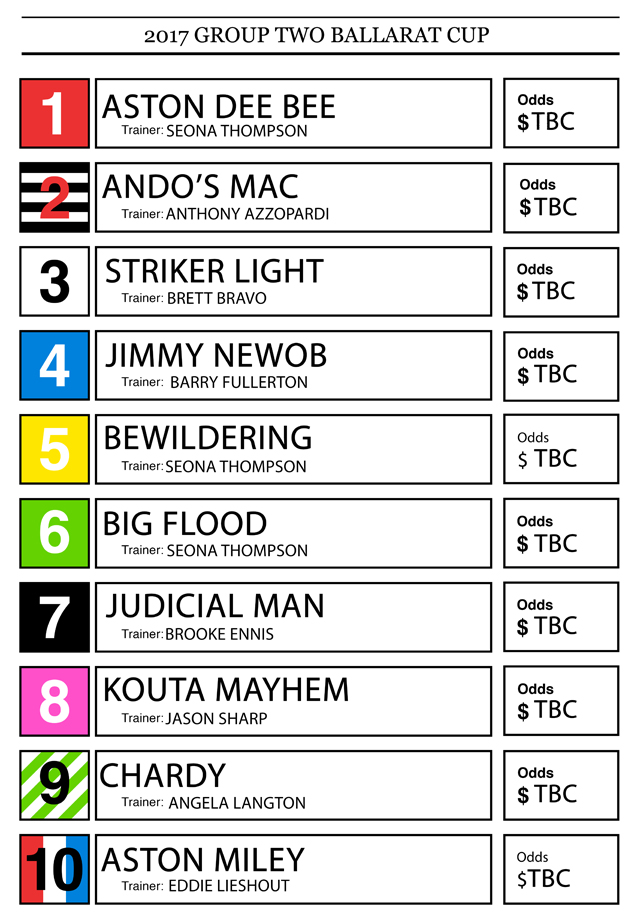