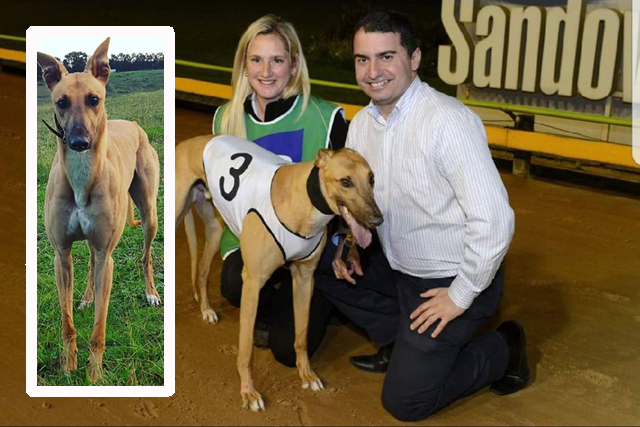 Monster Fish to sink or swim in Ballarat Cup

One of the bright new faces in the Victorian training ranks, Gorman, 33, married into greyhound racing royalty, with her husband Matt a grandson of legendary mentor Peter Giles, revered as ‘The Moe Maestro’ and a phenomenal conditioner of stayers.

“I’ve been training for about eight years and full-time for the last couple of years,” Kate explained.

“My parents had greyhounds when I was really young and then I met my husband Matt when I was 19. Matt’s mother is Lauren Gorman and Peter Giles is his grandfather.

We bought the property off Peter and Jeannine about two years ago, but they’re always around helping out. Peter is always on the mower!

“We have 14 race dogs and we also do rearing and pre-training, so there are roughly 100 dogs on the property.

“Matt was diagnosed with a tumour in his spinal cord last March – fortunately he’s okay now – but that forced him to stop work and he’s a huge help with the dogs. I couldn’t do it without him.”

Kate is hoping to qualify her first Group finalist on Saturday when superbly bred prospect Monster Fish, a son of the great Fernando Bale and Scissor Queen, faces the biggest test of his 18-start career in the first of eight star-studded Ballarat Cup heats.

After seven wins, Monster Fish has been thrown in the deep end – pun intended – for his first appearance in elite company, with his heat rivals including 2016 Melbourne Cup hero Ando’s Mac, Group 1 winner Black Mumbo and in-form rails runner Eyes On You.

“But the times he trials are as quick as anything I’ve ever had and I think he deserves a crack at it. You’ve got to be in it to win it!

“I’d been thinking about the Ballarat Cup, but thought it was probably out of his reach – I still think it’s out of his reach – so I decided to take him to Ballarat before the heats and make my decision on what he did. He went brilliantly, running 25.09, so here we are.

WATCH: Monster Fish win on debut at Ballarat last start in the lead up to the Ballart Cup heats.

“Earlier this year we made the Warragul St Leger Final with Ice Cool Kaedyn, but I haven’t had a runner in a Group race yet, so I would love to see Monster Fish make the final, but he would need to lead.

“He’s my boy and we always knew he was something special. We got him to rear when he was about six months old and then around break-in time we came to an arrangement to buy him.

“We’ve also got his litter sister Setelia. She was going as well as Monster Fish, but then she severed a tendon. We kept her as a broodie, but decided to give her another go and she won her first start at Traralgon a couple of weeks ago. I was just rapt to see her get to the track after four vets told us she would never race.

“Monster Fish is the best dog I’ve had so far, but when I first started out training full-time we had a stayer named Calder Cannon that was going to be a superstar. Unfortunately he got sick and we lost him, which was devastating.”